Come Join Our Community of Spirited Women Next Time Around. 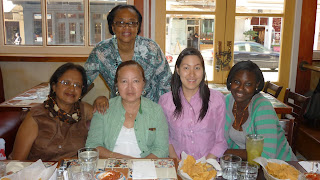 Mary Ann's Tribeca Mexican moved away a few blocks but that did not stop us from hunting down the new location. We wanted to once more experience the great tasting food and free-spirited atmosphere. This gem of a restaurant is a perfect reason to get dolled up. It has been only three months since the members of the Women's Club met but everyone was greeting one another with excitement and glee, as if years had passed since we last met. This is what I am trying to tell you, the atmosphere at Mary Ann's allows that openness. We were loud, our smiles spread across our face from ear to ear. We called out the person's name as they entered, we ran over to hug another who had escaped us in all this merriment. It was as if the paparazzi was in town but no, it was the amateur photographers from our group, snapping away; bright lights shone from their cameras as they call out for someone, anyone to come over to pose for yet another photo.

The restaurant's other patrons were eyeing us with smiles pasted on their faces, the looks said, "may we join your fun loving group?" We talked at rapid speed, some worked the room, moving from table to table, meandering from end to end, bouncing into each other, until we finally settled down to allow the waitress to take our orders. Kudos to the brave soul who dressed up and modelled one of the dresses on display. I told the story of the big heart seamstress who was making these beautiful dresses for young girls in Zambia and Haiti. Thanks for the entertainment, you looked marvelous. 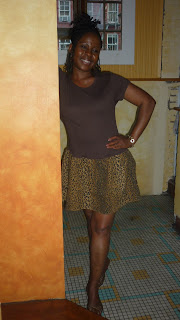 Our non-stop chatter was about everyday living. Among us were three retirees and three others who had flown the coop and had new employers but still wanted to hang with us. There were also new faces and of course the regulars, loyalists to the bone. The conversations became livelier, especially for those sipping liquor-infused drinks. From the looks of the empty plates, Mary Ann's had earned another stripe in the great tasting category.

Each time we meet I gain a greater appreciation for living, living with intentions. Tonight I got the genuine flavor of this gathering. Our small group of twenty-one showed sheer bliss. It was a small but mighty group, full of energy. But what was all this hoopla about? As we bid adieu, our restaurant jester, who may have taken a sip too many called for a monthly gathering, like she always does when she is 'high' on excitement. She even wanted dancing added. See you in three months my friends, by then you will be hungry again, rather starving for another girl's night out. I make no promises but I will see what I can do about us cutting a rug{dancing}.

The glow from our faces lit up the way as dusk began to fall. On the way home as my mind wanders, I couldn't help thinking why this gathering continues to gain momentum? Why the novelty has not yet worn out? Tonight we had laid down our worries, if only for a moment and brought sunshine into our lives. That's what the hoopla was about and I can still hear the chatter and the laughter even hours later.
Looking for the next cuisine, setting the next gathering date are done with doses of love for the women who warmly received the open invitations.
All is well! 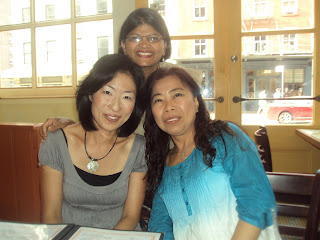 It was a fantastic assembly. We had so much fun with so much energy! And thanks to the generous and marvelous restaurant, which I will recommend to anyone from now on.