The Choose To Care Cheerleaders,Niza, Navdeep,Maricella, Monica, Yanilsa, had been preparing for months, getting ready for our Youth In Action celebration which took place on Saturday, March 19. This time around we wanted the kids to learn how good nourishment allowed the body to grow just like the tomato seeds planted months before the actual celebration.  The seeds were planted at 2 months, 6 weeks and 2 weeks intervals and were used to demonstrate growth at different period in the young childrens' life and how similar the results are when they are fed nutritious foods on a regular basis, they grow strong and healthy. We hope the families, including the children understood how they measured up to the budding plants.The children planted their own seeds and were instructed how to care for the plant at home,giving water and keeping it in the sunlight on the windowsill.

Snack time featured easy to prepare, finely chopped tomatoes,cilantro, onions, fresh lemon juice, mixed together with a dash of olive oil and served with corn chips. A young girl who at first did not think her taste buds would like this concoction, was encouraged to give it a try; she ended up asking for more.  We all enjoyed this refreshing, flavorful dish, tomatoes swimming in its own juice and a bond was formed.  The young girl was so impressed with the Nutritionist who had encouraged her to taste the delicious mixture that she requested a photo with her.  Such is the power of encouragement, it fosters hope. 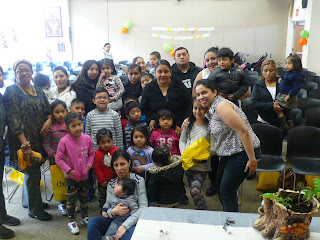 Thanks for your expertise and caring, for your compassion and skill that you bring to these young children and their families.  Your support of CHOOSE TO CARE gives each of us the opportunity to touch the lives of so many in our communities.  As each child left with a brand new pair of shoes,we would like to think that on this day we planted the seeds of hope. One thing we know for sure is that all our taste buds came alive with a snacking good dish.


"There can be hope only
for a society which acts
as one family,not as many
separate ones."
Anwar el- Sadat
Posted by Brawta at 6:21 PM 2 comments:

ON THE ROAD - MAKING MY ARRIVAL IN INCREDIBLE INDIA

" I have always known that at last I would
take this road but yesterday, I did not know
it would be today."
Ninth Century Japanese Poet

I had barely began to wonder out loud, where my feet would take me and pooh, my traveling partner and I found ourselves in Delhi, the capital of this magical and exotic country, called India.  If I did not know better, I would have said it is the work of the travel genie.  Although this was not my first trip to India, I was heading in a different direction in this vast land and I expected a different vibe.  We were heading to what the travel brochure aptly described as the colors of Rajasthan.

So we landed in Delhi and was greeted with a huge garland of marigold placed around our necks and proceeded through pristine Marg (Streets) when the guide announced that this is not the way everything looks, as if preparing me for the real deal. Of course I do not need any such caution but he does not know that and I sat back with excitement and anticipation ready to soak it all in.  These are the moments that I am glad for, staring out the window of a moving vehicle, lost in my thoughts, right now in awe, and I keep asking myself "How did I get here?"  In my youth when I read about this place in books,  it was such a distant land; in adulthood, I knew I would set foot on this soil, just did not know when it would happen.  Our journey had begun, a tour of the simple marble memorial to Mahatma Gandhi in Delhi, marks where he was cremated. This a man I have revered and admired for his concerns for the downtrodden around the world.

From Delhi to Agra to Bharatpur to Ranthambore to Jaipur to Jodhpur to Udaipur and towns in between, we passed through bustling streets in a dense maze of residential homes; the buffaloes, cows,cats,dogs; the pushcarts of fruits and vegetables piled high, all existing together.  The streets are teeming with people, activities, rickshaws, shops galore, selling everyday necessities, sweet shops, street cooking,masala chai stands,scooters,fabrics, colorful saris, flowers and marigolds.  Yes, the same marigolds that were strung around our necks on arrival by our welcoming guide, is known as the herb of the sun,later I discovered it is a symbol of passion,creativity and used for weddings, religious ceremonies and offerings at temples. The patterns and colors of the streets are dazzling and I am loving it.

For years, while working on a crossword puzzle, there is often a query about the Taj Mahal and I would fill in Agra. Tonight I am transported to a local theater in Agra, to watch a showstopping production of how this magnificent building came about.  The romantic story of the king's love for his queen and her death in childbirth  which led  him to build  this temple as a tribute to her,was moving to put it mildly.  The costumes were out of this world, the acting and singing draw you in.The next day our excursion took us to the Taj Mahal and as we enter the one of a kind temple, I am in a trance.

Ranthambore offered a safari, we were searching for the evasive tiger. On the early morning outing, the jeep makes it way through rough terrain and we are holding on for dear life.  I can see the monkeys out of the corners of my eyes, up to their antics, the deers are prancing, there are other animals around but we did not come to see anyone but this tiger that is playing the game of hide and seek.  The afternoon outing brought us luck, other guides had decided to work together to alert each other when they thought there was a sighting. The alarm sounded and there was a mad rush to the bank of the lake and my alert eyes caught the strut of the beauty, with its striking colors, moving in and out of the grass by the water.  You could hear a pin drop, all attention was on the tiger.  He disappeared for a while and we sat in anticipation that he would appear again. And he did!  The cameras were pointed to capture this beautiful creature with its nonchalant attitude, telling us humans that he is in control.  The tiger disappeared once more and we lingered, but "that was enough show for the night" said the tiger and we left as dusk began to fall.  The next morning we were still on its trail but it never showed.  I am satisfied.

Incredible ingredients make incredible meals.  This is the land of vegetarianism and my taste buds were awakened by the spices and the delicious cuisines.  My breakfast order was never without masala dosa, that rice and lentil crispy crepe served with sambar and coconut chutney.  Idli, the steamed rice and lentil dumplings became one of my favorite, I ate many pieces of paratha,naan, roti and other stuffed flatbreads. Samosa, the fried pastry encased with masala potatoes, the rice and yellow lentils, tempered with cumin seeds, hit the spot and so did the biryani, a melange of fresh vegetables, sprinkled with fresh herbs and saffron; too many delicious dishes to name.  My eyes were bigger than my stomach and I could not resist a second helping at each meal, including desserts.

As I sat on the train between cities, it was a time to slow down my senses and savor the beauty in all of this mixture.  I relaxed and breathe, took in the countryside, the texture, the flavor, the aroma and i enjoyed it all.  Our journey continued on by road to various temples, forts, palaces.  In Jaipur, the capital of Rajasthan, the city is dubbed the Pink City, painted pink, decades ago to welcome the Prince of England and the color has remained. The imposing statue of Jawaharlal Nehru, the first Prime Minister of India stands in the park.  We learned about the moguls, the dynasties, the gem stones, silver, wool productions, the agriculture; lots of potatoes, beets, guavas, zinc, marble,etc.  We travelled through garbage strewn roads, dusty fields, there were people feeding birds, an act of charity was the explanation.

We watched the movie Lagaan, while we travelled on our private bus, this was so much deeper than a cricket match between England and India.  A visit to a Jain temple, enlightened us to its followers beliefs.  We passed through quarries, that produced rose colored sandstone. The gypsies, how can I forget the sight of a young girl doing cartwheels in the busy metropolis, hoping to earn a few rupees for her gymnastic skills. There were others touching their mouths and stomachs, motioning that they were hungry.  How about the farm with the ox harnessing the water to the farms.  Finally we are in Udaipur, a breathtaking town, called the City of Lakes; we travelled to our equally beautiful hotel by boat, there it was, the Taj Lake Palace, sitting on a lake that comes with so much history.

We had the greatest of accommodation, saw barren and lush lands, walked through a beautiful garden, named the Garden of Maids  I could not tell you about every inch of this worthwhile journey but I have told you a lot,in a jumbled way because my experience was a mixture of so many things.    I am still tickled pink, remembering the cows and the buffaloes, crossing the streets, paying no attention to the oncoming traffic; they sent the message,loud and clear that they must be allowed to cross at their own pace and the drivers must slow down.  I hope I have conveyed how wonderful an experience this was for me.  I hope you have sensed the joy running through my veins and into my soul, when I placed this exciting country on my list of places to go, I never expected to discover such a gem.  At the end I left on a high note, wanting more.
"Not just yet Genie(grantor of my travel wishes), allow me to savor this extraordinary journey, but I could use a good cup of masala chai, just about now."
Nameste!
Shante!
Posted by Brawta at 1:26 PM No comments: